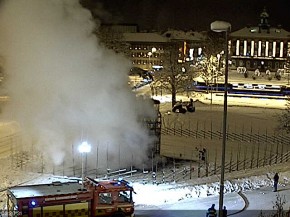 The goat could not be saved 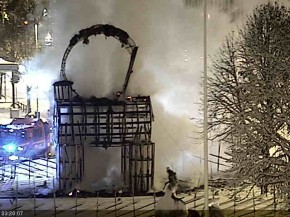 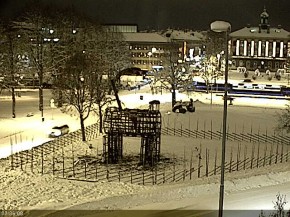 At 3 am the big goat in Gävle was set on fire and could not be saved.

Gävlebocken soon on his feet

They have started to build the goat in Gävle now. I wonder how long he will live this year? 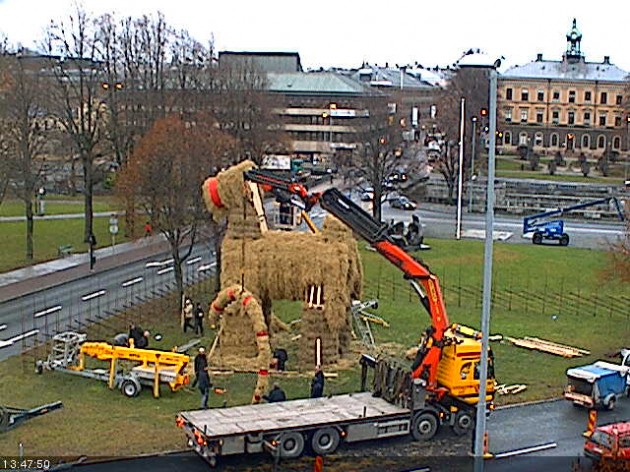 The biggest Christmas Goat in the world

The strange history of the Gävle Goat began in 1966. A man named Stig Gavlén came up with the idea of making a giant version of the traditional Swedish Christmas goat of straw. The aim was to attract customers to the the shops and restaurants in the southern part of the town centre.

On 2 December the 13-metre (42,6 feet) tall, 7-metre long, 3 tonne goat stood on the square. At the stroke of midnight on New Year’s Eve, the goat went up in smoke. The perpetrator was found and charged with vandalism.

The Gävle Goat has been burned down 22 times since then.

There are two webcams showing Gävlebocken on his website (in both Swedish and English): http://www.merjuligavle.se/Bocken

Gävlebocken has his own blog (in both Swedish and English): http://merjuligavle.blogspot.com/

…and he is also tweeting! http://twitter.com/Gavlebocken