We didn’t have all the traditional food we usually eat in Sweden on Christmas Eve, but Jan-Olof brought inlagd sill from Sweden and I made rödbetssallad after my grandmother’s recipe. We also had Findus småköttbullar and knäckebröd that we bought here in Malta. Kalle found som kind of sausage that looked like prinskorv, but it didn’t taste like prinskorv. The only thing I missed was julskinka. 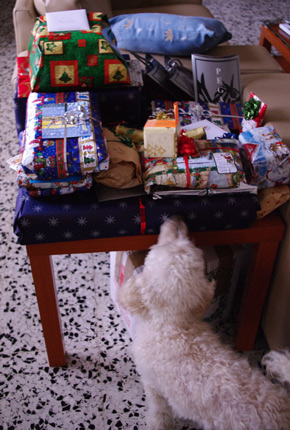 Gizmo is checking out the christmas gifts 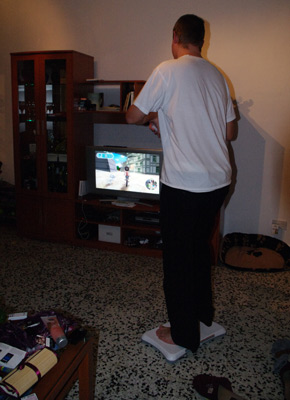 Kalle is also checking out christmas gifts. He gave me the Wii game "Wii Fit Plus" that I wanted, and now he is checking it out. 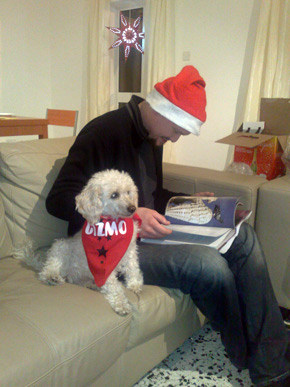 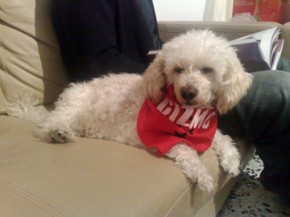 I’ve been baking gingerbreads for over 3 hours now

0
by Emma in Food and drinks, Living in Malta

I made heart-shaped gingerbread this year

…and I still have dough left that I had to put back in the fridge.

A few years ago I made lussekatter (saffron buns). And I thought it was just as good to make a lot of lussekatter, so I almost doubled the recipe. Then I was stuck baking lussekatter for 6 hours. I was sooo tired the next day! But I think my collegues at work were happy when I served the buns at the coffee break.

So, this time I made only 3/4 of the recipe. Next time I’ll only make half!

The gingerbreads are ready!

2
by Emma in Food and drinks, Living in Malta

Some of the ingredients for gingerbread

No, I did not drink the cognac. I used it to flavor the dough.

It smells like christmas in the kitchen now, with all spices... 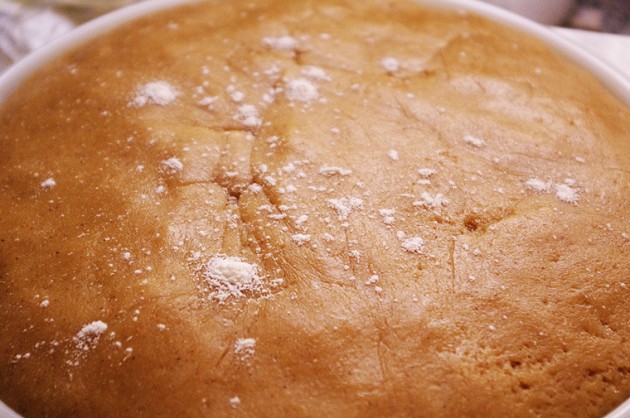 The gingerbread dough is ready! Now it has to rest for 24 hours before I bake the cookies.

Tonight we were invited to a Majjalata (pork feast) in Birżebbuġa. We were immediately served Maltese specialities such as Maltese goat cheese and bigilla. Together with the snacks they served a strong punch made of gin, vodka, red wine, sambuca, fresh fruit and probably other stuff. It was strong but tasted good.

Bigilla is a traditional Maltese snack, made out of beans. The main ingredient of bigilla is a special type of broad beans known in Malta as “ful tal-Ġirba”.

I think there was about 20 people at the majjalata. Everyone but me was men.  I don’t know if that’s how is usually is or if it was a coincidence. I felt very welcome anyway.

It takes about 6 hours to roast a suckling pig. This weighed about 45 kg I think, and was ready about an hour after we arrived. The meat was served with Maltese bread and sliced potatoes and onions cooked in wood-fired oven . It tasted really good!

After dinner it was time for telling stories and funny jokes. They tried to tell some stories in English, but some of them were only funny when told in Maltese, they said. It was fun to just listen and see the other’s reactions anyway.

Later on they served cake and had fun with firecrackers.

It was a fun evening and I’m glad we got invited. 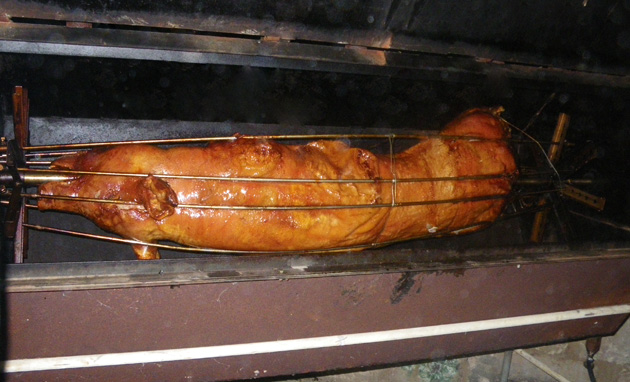 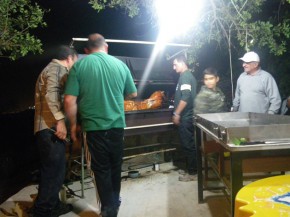 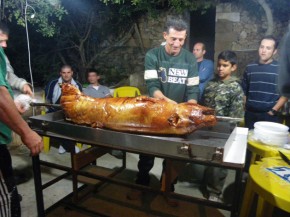 Who wants the first piece?

Christmas decorations, sushi and a king!

After work today I went to Valletta with Kalle, Brolle, Frippe and Martin. Frippe wanted to have more of the sushi he had at Premier last time he was here, so we all went to Premier for dinner. The guys all had sushi and I had 4 kind of tapas. I liked it a lot!

It was nice to walk down the main street with all Christmas decorations which lit up the street. 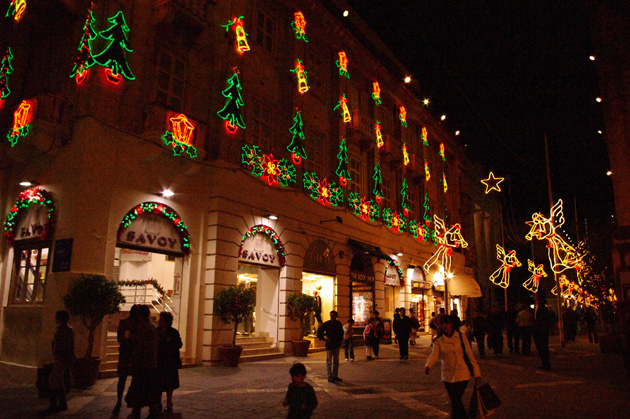 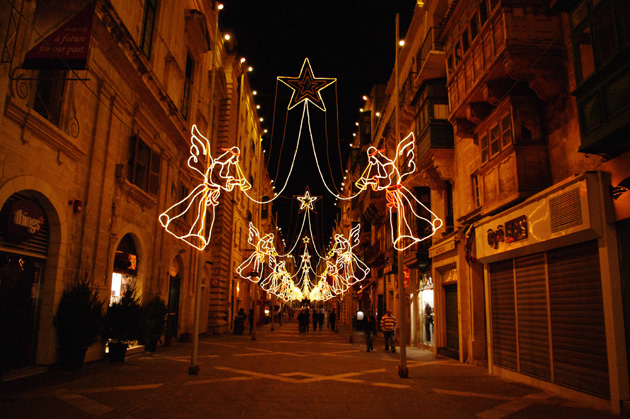 Still some people out when we went home

On out way to the car I noticed that there were a lot of police officers walking along the main street and just as we were about to leave the main street, a caravan of police cars and motorcycles came through the gate. When I came home I read in timesofmalta.com that the Spanish king Juan Carlos is here for a 2-day visit, so I guess that’s who we saw.

Spanish King Juan Carlos has arrived in Malta on a two-day state visit.

The King was greeted by President George Abela and was introduced to the Prime Minister, the Chief Justice, the Cabinet, the diplomatic corps and senior civil servants. He also inspected an AFM Guard of Honour after the anthems of the two countries were played.

The King will hold official meetings tomorrow with the President, the Prime Minister and the Leader of the Opposition and will lay a wreath at the foot of the War Memorial in Floriana. Spanish Foreign Minister Miguel Moratinos, who is accompanying the king, will have talks with Foreign Minister Tonio Borg and sign cooperation agreements.
Queen Sofia had to cancel her visit to Malta because she is indisposed.
The farewell ceremony, tomorrow afternoon, will be held on the Palace Square in Valletta. 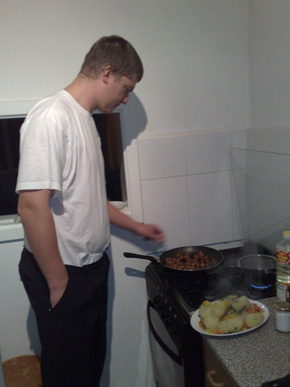 Kalle is cooking today. Meatballs, potatoes and gravy sauce. I like!

0
by Emma in Living in Malta, Sweden abroad 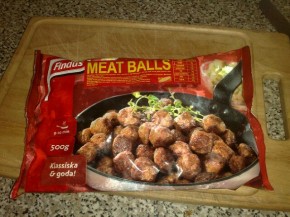 I’ve found Findus “Klassiska & goda” meat balls in one of the stores nearby. I knew they had Findus frozen vegetables, but I’ve never seen meat balls here before. 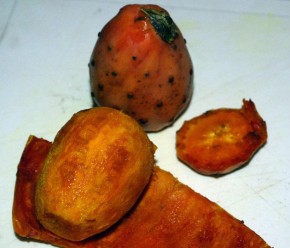 The cactus fruit is common on Malta. We see them everywhere… They are full of seeds, but the taste is sweet. Just peel of the skin and dig in. But beware of  the cactus tags on the skin when you peel them!

Dinner at the Black Pearl

0
by Emma in Exploring Malta, Living in Malta, Sweden abroad

Finally we got to The Black Pearl, where we were meeting up with Hultmans (En plats i solen). Kalle and Chelle came shortly after us by bus. Unfortunately the food wansn’t the best we’ve had… Abbe’s Fish n Chips had only tiny pieces of fish in it so we sent it back to the kitchen. Kalle ordered schnitzel and got curly pieces thin as leaves. So he also sent the food back to the kitchen and ordered rabbit instead. I don’t think any of us was pleased with the food. Hopefully the chef just had a bad day.

The Black Pearl has an interesting and chequered history which dates as far back as 1909. Built at Pukavik in Sweden, and destined to be one of the last serviciers of the wooden trading schooners, she was originally named the “Black Opal”.

Fashioned on strength, so that she could penetrate the Baltic ice floes in the cold winters, and sail in the strong nordic winds of Scandinavia, the Black Schooner was constructed with a hull of two layers of thick seasoned oak. Over one hundred and fifty feet long, and with three stout masts rising ninety feet from the deck, the “Black Opal” must have made a majestic sight indeed as she sailed the high seas on her trading missions carrying a net weight of nearly four hundred tonnes.During her lifespan, the black schooner has faced many vicissitudes. For sixty-nine years she navigated under sail with cargoes of grain, coke and wood on voyages to the remotest areas of the Swedish scurries.

In 1969, she arrived in Ramsgate where she was converted into a barquentine with a luxuriously refurbished interior, modern equipment and nine thousand square feet of canvas. This re-construction work was completed on Christmas Eve in 1973.

Re-named “Aeolus” she then set sail for Australia with a crew of six, sixteen guests who worked their own passege, and a parrot who answered to the name of “Herman”. On the voyage to Australia, she called at Lisbon, Martinique, the Virgin Islands, and the Galapagos Islands.

From the cold nordic temperatures of Scandinavia and the North Seas, the Black Schooner found herself in the warm climate of Australia and the South Pacific, in the year 1974. Her owners employed a crew of sixteen professional seamen, provided accomodation for forty pampered guests and used her for holiday cruises from Australia and the Pacific Islands.

Eventually she developed weevel worm in the hull and had to be sent back to the United Kingdom for repairs. Enroute, misfortune struck as when passing through the Suez Canal a fire broke out in the engine room. She sailed into Maltese waters for repairs in 1976, and was abandoned by her owners in Marsamxett harbour where she sank, settling on the seabed at a depth of 70 feet.

In 1979 she was refloated by the Vella brothers. Her hull was repaired in the Marsa floating dock, and she was towed to Anchor Bay to be used in the filming of the motion-picture ‘Popeye’, in which she played a prominent part. She sank once again during a freak storm in 1981 and was later towed back to the Grand Harbour for repairs.

Now called the “Black Pearl” the schooner remains a majestic sight, reminiscent of days gone by, when sails ruled the waves. She no longer has to face the battering seas and high winds, as she lies safely in the sanctuary of the Ta`Xbiex Yacht Marina, for a well deserved rest.

Her present owner Vincent Vella has with foresight and entrepreneurship, converted the Black Pearl into a de luxe Bar and Restaurant, where guests are again pampered on board with lavish up-market cuisine and a first class service.

This major operation was completed in six years, with the help of family members, friends and volunteers. Now a unique attraction in the Maltese Islands, the Black Pearl is again at the service of Ladies and Gentlemen with a sense of adventure who like to enjoy a first class lunch or dinner, and a drink in a truly magnificent atmosphere. 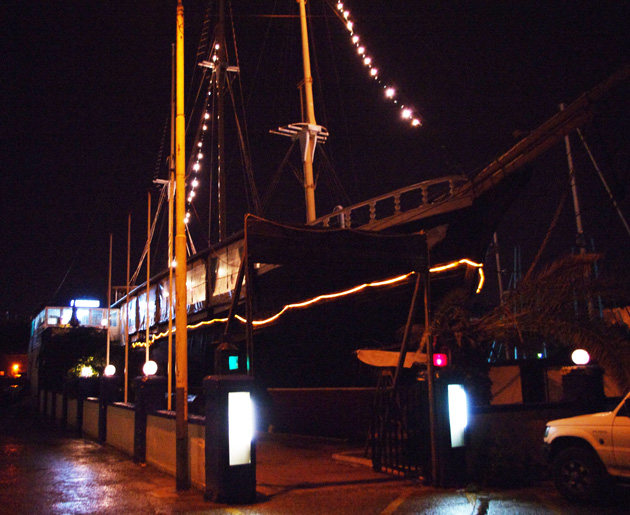 Frippe had sushi for lunch and he liked it a lot.

Best sushi on this island! 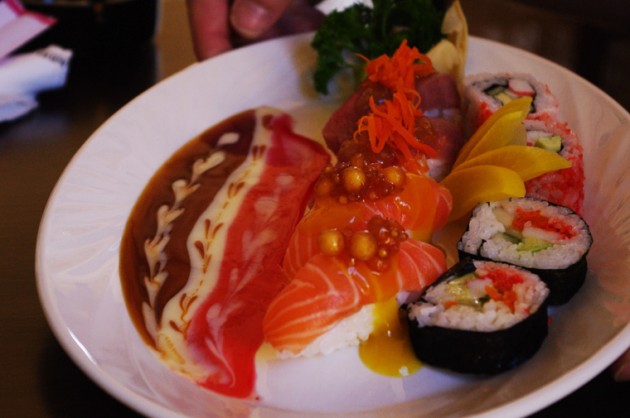 dine out food friends
Next »
Go to Top